From a lot of time I believed that every human being has some kind of a circle (or maybe a sphere) around him that separates him from other humans. This circle (or sphere) starts to shrink with another human as long as his relation with that person becomes friendlier.
So if you can notice yourself when you are introduced to other people, at first you try to keen the maximum space between you and him, as your relation gets stronger with him, the physical distance between you and him just shrinks. If anybody tries to break the borders of this circle, you just get nervous, so if you had ever noticed people in the elevator, as the space is so little, everybody just acts weird, like you see somebody looking at his watch, another just looking at the ceiling â€¦ .
The other day I was introduced to someone, I don’t know about his mentality, but every time he talks to me he gets (physically) closer, I just try to get away, and a long loop of this just starts to happen, after a little while I was very annoyed so I told him that his breath is killing me (it’s just to let him keep some space). In the end of the day I apologized for what happened and explained to him everything, for some reason I don’t understand I felt that he was more offended by what I say more than when I told him that breath thing. Can anybody explain?

Today I was surfing the internet and by chance I went to the PC World site, I stopped at the best products of the year, and as Expected Firefox is on the top of the list, and IE is not mentioned :p.

I was looking for that movie for a long time, but I just couldn’t find it, Until yesterday I had the chance to see it as it was broadcasted on the TV and it really dazzled me, If you haven’t see this movie I hope you go and look for it first then come to continue here, as I don’t want to ruin the story of the movie for you.

At first what is magnolia?

Magnolia is a magnificent shrub with exquisite heavily perfumed flowers, considered to symbolize femininity and beauty.

The movie is about one day in a lot of peoples lives, A man who is dying in cancer, his wife who finally learned to love him, his nurse who really tried to help him really hard, and a son of him who considers him dead, a show man (his show is something like What do kids think? I guess) who is also in the beginning of his end, with a wife who he had cheated on her, and a daughter that really hates him (I just couldn’t catch the reason, if you did please tell me) who is also a Coke-addicted, a genius boy who is participating in the show, also his father who wants him to win, an ex-genius boy, who has made a record in that show, who also has lost all what he got in his life. A cop who is divorced and feeling lonely who in that day meets the daughter of that show man and falls in love with her, and also a mysterious boy who just meets with the cop, and the wife who is rapping a song, claiming that it’s telling the truth, and also giving the answer to who is the killer.

There was no center story in this movie, but a couple of threaded stories going on who in some way interacts with each other, going from one detail to another, but in my point of view almost all of them were going to a change point that day, the wife wanted learned to love her husband finally, and her conscious is torturing her for cheating on him, her husband admits his faults toward lily which is the mother of his kid, who named himself in another name (he was Jack but everybody knew him as Frank), a reporter shocks this Frank with the real story of his life, This show man find out that he has cancer, and tries to fix things up with his daughter, and for falls in the middle of his show, the genius boy at last refuses that his father is not treating him right, he also refuses to go on stage for the one-on-one competition, so his team losses, he refuses to be a joke for the audience, the ex-genius boy who lose his job, who discovers that he is only spending money on things he doesn’t need, who just says that he just knew useless information, none of this information helped him with his life (I guess he was also gay, I don’t know), â€¦ etc.

There are some little things that happened in the movie I really couldn’t fully understand.

The Frogs rain I know it means that strange things could happen, but is that it all, why frogs, what do they symbolize.

This mysterious kid, who is he? And what was he actually talking about? I couldn’t get it really.

What does the dog eating morphine meant, the only thing it mad that it died in the end with the dying man, does it mean anything else.

If you know please tell me.

I really want to see this movie again â€¦

This is a saying by the great writer Jack London, I just really love it.

Jack London is one of those people who really influenced me in the beginning of my life, perhaps the only Novel I read for him was The Iron Heel translated in Arabic in the name of (العَقِب الحديدية). It was written in 1907, it discusses some events that Jack London predicts that would happen, it’s as some kind of story was found in after about 600 years from now, and then he starts reading it with commenting in it as it was really written in that age, the story begins in 1912, as to discuss the situation that lead to the Big Chicago Commune, which he predicts that this would be the first movement against the American Oligarch (which is type of an aggressive Capitalism) against the Labor.

This Story had really influenced me, as it was considered the Bible of the Socialism. That’s because of the discussions which were in the story, They were the best discussions I ever saw, I really recommend this story.

These days I’m looking for another books for this writer, I found some of the on the Internet, but now I have to find time to read them.

I hope you could read the story, in Arabic or in English, it is really a good one.

To listen to the song By Marcel Khalifah
Click Here!
It’s so cool 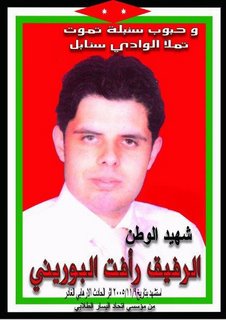 I remember the first time I saw Ra’afat, I thought he was bluffing that he cares a lot about people, after a while of knowing him, it turned that he really cares a lot … he was a very simple guy, who just want to live a natural life.
I just wish that all of this just didn’t happen, I just wish that he could come back again, I would be waiting for a phone from him to tell me that he would be coming to spend the night in my house … but I just know that this wont happen.

Well, tomorrow I will finish 22 years of staying alive, every year at this day, after all the partying is over, I set with my self, and try to remember what have I done in the last year.
And as this year there would be no partying (None of my friends are in Jordan), I think I would do it now.
As I remember my last birthday, we were some bunch of guys who had some good time that evening (nothing really interesting just good time).

I remember I had the worst New Year day, a lot of troubles happened that night I just hate to remember.

I also remember that in the beginning of January I started taking German course at Goethe Institute. I met some interesting people there, also I have advanced a lot in the German language (as I knew nothing), I’ve finished four courses, and I’m off for the last 2 months, I will get back in the beginning of November.

Also in this year (at the beginning of May), I’ve quit my job at MSCT, and started the worst experience of my life by working at **** ******, this company (or some stupid store) has gone beyond any company which can get worst, I think they have reached the bottom and start digging, and I guess they are enjoying it, which made me leave my job after 3 months without even finding a new one. Which has made me Enjoy one of the worst days of my life, I was there, searching for a job, with no money, with almost no hope, this was the worst 3 weeks of the year, (but even though it’s better than imagining your self working at **** ****** for the rest of the year).

This period just needed to end, and it did, I found a new good job at Maktoob.com Inc., which I’m still in (and I guess I would be for some time).

Here at Maktoob I found some new interesting people, and also a good working environment, I’ve learned a lot here, so I like it â€¦

I guess this is a brief description of my life in the last year, I guess I would leave it as is.